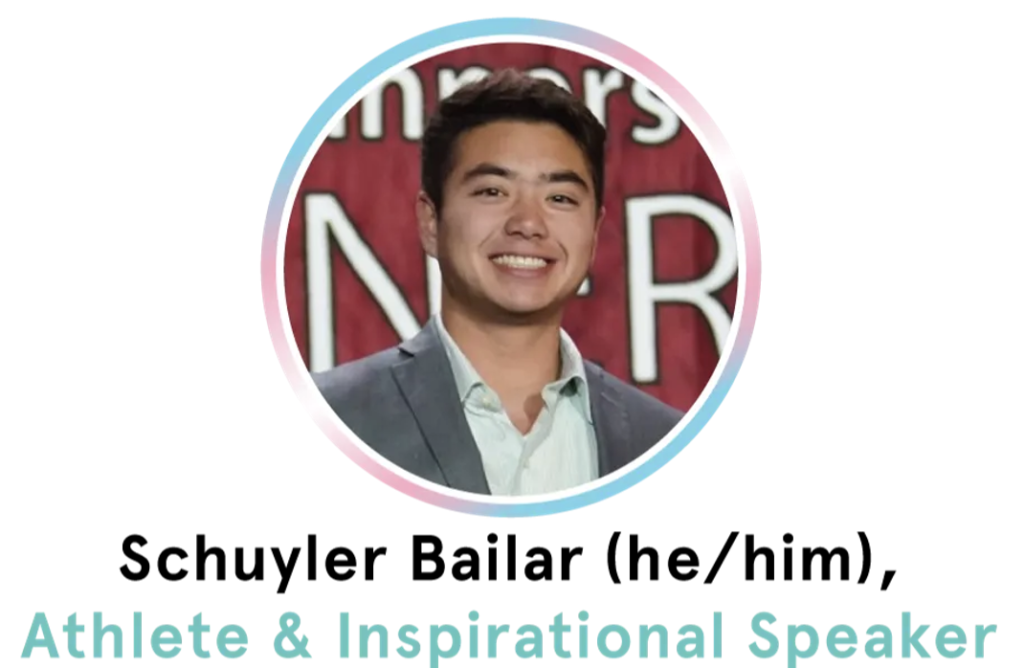 Transgender athlete Schuyler Bailar has broken many records in his life, one of the most notable being that he is the first transgender athlete on any NCAA Division 1 men’s team. Schuyler is also an advocate and activist for the LGBTQ community, using his voice to empower others. Though his accomplishments as a swimmer and Harvard athlete are truly admirable, our interview focused on his mental health journey as well as his upbringing as a mixed-race Korean American. Schuyler has always been open about his mental health struggles and we at the Asian Mental Health Collective are honored that he has allowed us to take a peek into his inspirational journey to becoming a professional swimmer and a big voice in the LGBTQ community.

Schuyler is no stranger to mental health struggles, as he is someone who has battled with anxiety throughout his whole life.  Schuyler broke his back after a biking accident in high school, which resulted in him being unable to swim for many years. While in recovery, Schuyler lost his identity and struggled more with his mental health because “breaking [his] back had taken everything that [he] knew and used to cope” as a competitive athlete. Schuyler also began struggling with an eating disorder which he went to a rehab center for 4-5 months during a gap year between high school and college. This was also where he discovered the term transgender and began realizing his gender identity. Besides these personal health struggles, Schuyler was also battling with the internal feeling of “being between worlds”, which is a big recurring theme in his life.

As a Korean American, Schuyler had difficulty reconciling the two halves of his identity, his Caucasian side, and his Korean heritage. He states that the “first thing [he] knew about [himself] before gender or anything was race.”

“I don’t know when I didn’t know that I was between worlds… my dad and my mom were completely different people visually. Race was something I saw everywhere,” he mused.

Schuyler’s Korean grandparents lived nearby and the proximity and familial closeness at times made him feel more Korean than White. However, he says how there is an “interesting erasure, where [he] is expected to be not Asian but also come from Asian roots.” His Korean grandparents enrolled him in Korean Sunday school, where he felt “dumb” as he could not compete with fellow Korean peers who spoke the language at home every day. Referring back to his struggles with an eating disorder, Schuyler mentions how his Korean grandmother showed him love through her cooking, and he felt as if he was “rejecting love, when [he] was rejecting her bowl of rice”. As he was growing up, people on the streets would assume he was adopted when he was with his dad, or that his mother was his babysitter as he did not look completely Asian or completely White. His mom eventually had to change her last name because others threatened her, saying that people would take Schuyler and his brother away if she did not have a matching last name.

“Knowing that I’m not perceived as my parents’ child is a painful experience.”

Going back to the time Schuyler was enrolled at the Oliver-Pyatt Rehab center for his eating disorder, he met a therapist who he states “saved his life”. For many years growing up, Schuyler struggled with gender dysphoria, always feeling the safest and most comfortable in short hair and boy clothes. However, he did not have the knowledge and terminology for what he was feeling until he spoke with this specific therapist. Schuyler talks about how his therapist listened in between the lines and figured out that his main problem revolved around his gender identity. Schuyler emphasizes, “I did not wake up one day and said I am transgender. People don’t decide to be transgender. They find the language, they find the courage, and they discover that’s who they always were.” With the realization of his gender identity came more problems, a major one being that he was going to have to choose between coming out or swimming and continuing to hide his identity. Over time, Schuyler was able to choose both competitive swimming and being open about his gender identity, and he acknowledges his privilege of having a supportive, loving family who was behind him every step of the way. Schuyler laughs as he states that the only caveat his grandmother gave him about his identity was that “Korean daughters take care of their parents” and since Schuyler’s parents now had two sons, he was still going to have to step up. In Schuyler’s experience, his family is very matriarchal, and as Schuyler’s grandma accepted him, so did everyone else in the family.

Schuyler is now very open about his identity as a queer Korean American transgender man and has become a voice for the LGBTQ community. He actively shoots down misconceptions about the trans community and publicly voices his experiences in support of other trans youth. He states that, “Being trans is not a choice. It is an identity like how I didn’t choose to be Korean American. I did choose to come out about it and transition. For a lot of trans people, the choice to transition is a choice between life or death.” Schuyler notes his privilege in being able to come out and how choice is something he is lucky to have had in his life. He also clarifies how being transgender is commonly mislabeled as a mental illness and delves into the history of gender diversity. “White supremacy were the things that started to push out gender and sexual diversity as a way to oppress and assert dominance over other cultures. Pre-colonialism, homosexuality was actually praised.” The real mental disorder is gender dysphoria and he says how the treatment actually involves affirming the person’s gender identity, not forcing them to change. Transgender persons also are subjected to uncomfortable questions all the time about their genitalia or other invasive questions. Schuyler emphasizes how “sharing about being transgender does not invite you to ask questions, especially not about their genitals”.

Schuyler ends the interview with motivational advice for anyone struggling with their gender identity. He says, “The world will push you to be different versions of yourself and when the world tries to tell you who you are, the world is often wrong. The world and your parents do not know you better than yourself.” He also brings up a poem that he wrote to his 8 year old self while in treatment. Schulyer writes, “8 year old Schuyler, they’re going to try to trick you to think that you don’t know but you know who you are, and you have a right to know who you are.”

To keep up with Schuyler and his many resources, please check out our links below and follow him at @pinkmantaray on IG!