Like a Mustard Seed, Small Ripples Can Make a Big Difference in Mental Health

By providing platforms for people to talk, cry and listen to one another, Mustard Seed Generation wants to bring hope, healing, and reconciliation across the Korean American community. The organization started in the wake of the 2007 Virginia Tech shooting, where a Korean-American teen was identified as the perpetrator.

Then, MSG sought to bring healing to a community suffering from collective hurt and trauma. Today, it wants to normalize mental health conversations in this community which has traditionally shunned such topics. We speak with MSG’s chief executive officer Cathy Kang.

Tell us more about Mustard Seed Generation. What are you guys all about?

The image of a mustard seed often brings to mind something that is really small, but can make a big difference. Mustard Seed Generation, or MSG as we call it, is a non-profit organization started in 2007 by Professor Josephine Kim, a Harvard Graduate School of Education. Dr Jo wanted to bring messages of healing to the Korean-American community after the high-profile Virginia Tech shooting incident.

In 2017, I was then under the tutelage of Dr Jo at Harvard. My classmates and I joined her in organizing a conference on campus to raise awareness of mental health needs in the Asian American community. There, we saw how Korean parents, youths and community leaders actually wanted to learn and talk more about holistic well-being – which, up till then, was a very foreign idea, even for me. After the conference, some of us decided to partner Dr Jo in re-launching MSG.

I typically describe our mission with three “E”s. First, we want to educate parents and young Korean-Americans – to debunk certain myths, like how counselors and therapists are these people in white coats – to equip community and church leaders, and to empower Korean-American mental health practitioners. We want to make conversations around mental health normal in the community.

We have been trying to do that through annual conferences and workshops. Unfortunately, because of Covid-19, our conference this year can’t take place as planned. But we have a series of webinars lined up in May, which is also Mental Health Awareness Month.

I remember feeling a lot of shame when I found out it had happened. And because Korean-Americans are part of such a collective society, it hits harder and impacts all of us.

Dr Jo was called on the campus then, and she found out that the shooter clearly had some mental health issues. But the local communities, churches, back then did not have the resources to support Korean-American immigrants.

I think the bridge between parents and children is the most important bridge we need to build, or mend. Dr Jo herself has spoken to several individuals following their suicidal attempts, and most were motivated to do that because of cultural conflicts at home.

This might be similar to other Asian cultures as well, but in the Korean-American community, we don’t really verbalize care, or say “I love you.” Instead, asking whether you have eaten, or if you need food, are the more common expressions of love. And there is a word in Korean we use to say “to endure something” – so that sort of mentality is very entrenched and you just have to keep going, keep moving forward.

And there also are the labels placed on the broader Asian community in general, like the model minority stereotype, or that Asians are good at math… I, for one, am not.

We don’t have much opportunity to work at these emotions that are bottled up inside us. We need to get them to start talking about these struggles.

How do you do that?

During our conferences over the last two years, we’ve had bilingual sessions so that parents who are not well-versed in English can also attend with their children. And we have seen talk and cry, express how they have been misunderstood. There was just never a space for them to talk about it.

But when other people start talking about their experiences, others will do it too. It can be very powerful, when you have someone else first opening up about it, and then it kind of gives you the permission to do so as well. We want them to know that “healing really starts with me.”

Since 2017, more than 1,500 parents and students have shared their stories with each other at our conferences and our workshops. Right now, our work is based mainly in the Dallas/Fort Worth area, but we are open to doing it in other places in the country. We already have workshops in Boston and several Californian cities.

And how do churches come in?

Another thing unique to the Korean-American community is that most (70 per cent: CHECK) Korean-American immigrants are affiliated to a church in some way, especially those in the older generation.

Faith is a huge thing in the community – there is a running joke that if you put a number of Korean-Americans together, they will set up a church. I grew up in a church, and a lot of my friends in school are also my friends in church.

A lot of Korean-Americans who are not particularly spiritual or religious are affiliated to a church too, especially if they are new immigrants seeking community. So there is a lot the churches can do as first-responders to help with mental health.

Any thoughts on mental health for Asian-Americans, especially in light of this Covid-19 pandemic?

A lot of us have friends and family who work in healthcare – somewhat befitting of the Asian stereotype, that Asian parents all want their children to be doctors. And there’s been a lot of anti-Asian sentiment amid the virus outbreak. There was a family, here in Texas, that had been attacked at knife-point.

We have to be proactive about checking in with one another at a time like that, dealing with general anxiety, fears, and grief surrounding the pandemic, and also the discrimination.

To support Korean-American families through Covid-19, MSG is rolling out a series of webinars in May, covering topics like  how to regulate our emotions, how families can enhance communication during these days when they are spending so much time together at home, and conversations around anti-Asian sentiment.

To round up, can you share a bit about this image of a mustard seed? And also, what are your hopes for the organization, going forward?

Dr Jo came up with the name for the organization, and she was inspired by the parable of the mustard seed in Matthew 13 of the Bible – which talks about how even though it’s the smallest of seeds, it grows and becomes the largest of garden plants, and then a tree, so that birds can come and perch on its branches.

In some way, we hope MSG can be that too, that we can fill our own cups first and then pour them out to others. This is why we want to equip community leaders to serve their local communities. We hope to have opportunities to work with other marginalized groups as well, like the black community. 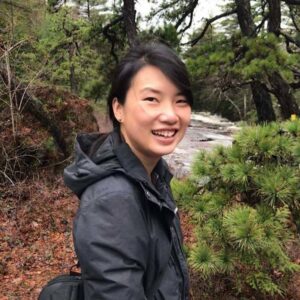